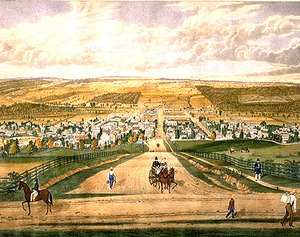 The JARC allocation is based on Tompkins County’s 2010 Labor Force, while New Freedom projects are allocated based on the County’s 2010 Population, shown in the Table A.

Job Access and Reverse Commute (JARC), by definition, directly relates to the labor force population, especially to increasing and sustaining employment for low-income persons.  Tompkins County is unique in the Southern Tier because the majority (57%) of its labor force is rural and 20% (14,900 workers) commute from other counties. Accessing a rural labor force is essential for Tompkins County to continue to grow as a regional economic center in the Southern Tier.  A 2008 labor market study identified  a significant labor shortage of basic-skilled workers in Tompkins County.[4]  Further, the local high cost of living and limited affordable housing dampens the ability to attract basic-skilled workers.  Therefore, businesses look to recruit rural labor force who cannot afford to, or desire to, live in the County. [5]

In 2008, a preliminary GIS analysis was performed by overlaying TCAT bus routes with general and senior populations by municipality in order to determine the percent of the populations located within 1/4 mile of bus routes. The population data was the 2000 Census. The TCAT system map of 2007 were the bus routes used. This was before the newest TCAT Transit Development Plan was put into effect in 2009.

The detailed results are shown in the Excel file below.

The results were the Ithaca Urban Area had 88% of the general population located within 1/4 mile of a TCAT bus route, while 31% of rural town households were as conveniently close to bus routes. This was strictly a geographical coverage assessment. It did not include an assessment of the level of bus service as shown in bus schedules.

This assessment needs to be redone with 2010 Census data and the current TCAT system map.

This chart shows the frequency of bus service, as represented by the number of outbound bus departures, for each one hour period for weekdays in 2008.

Urban routes (magenta) has buses in service 22 hours per day. There are nearly 40 bus departures at the height of the morning and afternoon peak periods.

Rural routes (blue) have about 25% of the bus departures as urban routes during the am and pm peak hours.