The ITCTC adopted the Coordinated Public Transit – Human Service Transportation Plan in October 2007 and amended the plan’s priorities in April 2009. The purpose of this amendment is to revise the Plan’s priorities for 2010-11.

The Federal Transit Program (SAFETEA-LU) requires all projects proposed in 2010-11 for the Section 5310, 5316 and 5317 Programs be included in a Coordinated Transportation Plan.

The County Coordinated Plan Committee held four meetings in 2010 to identify opportunities for coordinating transportation services between agencies, identify service gaps to address, and to develop and evaluate proposals for new projects.

ITCTC solicited proposals for FTA funding in March and April 2010. Nine proposals were received, evaluated and included in Table B (attached). Further, Table B includes on-going projects. The projects will be considered for federal funding through existing grants or new grant opportunities in 2010-11.  For example, New York State Department of Transportation is conducting a competitive selection process for rural JARC and New Freedom projects in May 2010.

1. To procure up to six (6) replacement paratransit buses for GADABOUT to be applied for in 2010-11 at the cost of $53,000 each.
2. To provide $150,000 for the County’s CityVan service for Towns of Newfield and Enfield in 2011.
3. To provide $217,000 for Way2Go Education Program for two years operated under contract with TC Cooperative Extension and Tompkins County through 2011.
4. To expand Challenge Inc.’s travel training program for individuals with disabilities for 2010-11.
5. To expand a car repair program for employed low income persons managed by Catholic Charities for 2010-11.
6. To compensate GADABOUT for 50% of the marginal operating costs to serve Challenge Inc.’s new location on South Hill for 2010-11.
7. To develop a new program of Way2Go, Ithaca Carshare, & GIAC to increase car-share membership and use for low-income persons in 2010-11.
8. To conduct passenger safety driver education for van drivers in multiple agencies in 2010-11.
9. To expand medical transportation provided by FISH volunteer drivers in 2010-11.
10. To continue New Freedom-funded services for ADA eligible persons with disabilities in 2011.
11. To expand the Women’s Opportunity Center transportation supports for women enter workforce in 2010-11.
12. To expand County DSS car loan program for low-income persons who are employed in 2010-11.
13. To coordinate individual travel training among agencies in 2010-11.
14. To coordinate mobility management planning and projects in 2010-11. 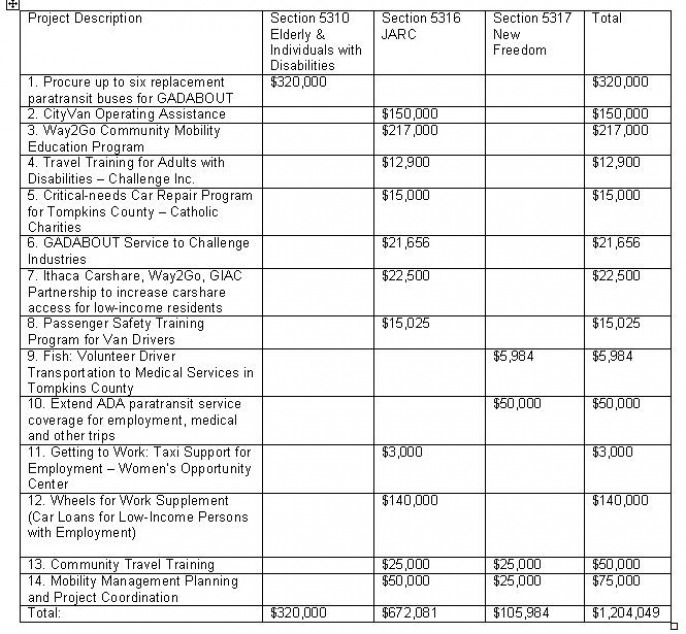